All the timber viaducts and other timber structures on the C&GWUR were to be found in the Stroud Valley between the west of Sapperton tunnel and the vicinity of the junction with the B&GR at Standish. Although technically there were nine viaducts, Capel's and Canal viaducts just east of Stroud were one continuous structure. With the exception of St Mary's, the main span of Bourne Viaduct and some smaller spans of Class 5 (SUB), also at Bourne, all were of Class 3 (QDT) construction. The most detailed plan available, showing trusses of Capel's Viaduct, gives us a good idea of the design features.

Rebuilding dates for some of the viaducts are uncertain. GWR plan lists seem to suggest 1868/9 for St Mary's and work in progress on Bourne in 1861. It has been stated by MacDermot, the GWR hisotian, that the Stroud Valley viaducts were rebuilt 'gradually from 1859'. This  aprehension seems to stem from a report to the GWR Directors of 31 March 1858, when Brunel informed the Expenditure Committee of the materials required for renewal of timber structures, mainly in the Stroud Valley. These he estimated to require £35,000 for renewal. Brunel confirmed that Slip Viaduct required the most urgent reconstruction and recommended that the work be done without delay. Works elsewhere were to be executed gradually over a number of years and were left for further consideration. This report must have caused the Directors some concern as Brunel attended a further special meeting of the Committee in April 1858. Regarding Frampton and Capel's viaducts, he confirmed that masonry piers should be built around and within the outer timbers of the piers, after which, when thoroughly consolidated, a plan to 'throw the arches from pier to pier' should be tried in order to see if they would be solid and substantial. This mode was in Brunel's judgement the least expensive reconstruction of the line. Although the 'further consideration' does not seem to have been recorded in the minutes, it would appear that general approval was implied for work over a period of years and progress on specific viaducts was not always further discussed at Board meetings. Frampton was attended to fairly quickly, but Capel's was not completed for several decades.

Frampton and Slip viaducts consisted of uniform Soft spans. They were both rebuilt fairly early, although it is not clear why Frampton was replaced after a life of only fifteen years. As its name suggests, Slip Viaduct was in a location that had experienced landslips before the railway was built and, was in need of early reconstruction. The next two viaducts, St Mary's and Bourne, both crossed the Thames & Severn Canal for which Brunel designed a form of 'A' truss in timber and wrought iron that is a sub-division of Class 4 (KTT1). Major-General Pasley stated in his report of 5 May 1845 that the transverse decking planks had wrought iron plates laid over them to prevent wearing their upper surface. This is a feature which does not seem to have been perpetuated elsewhere. Of the two, St Mary's had the greater span of 74ft and was a single-span viaduct, whereas Bourne's main span was only 66ft and was approached at its western end by four spans of Class 3 (QDT) trusses and a further ten smaller spans of laminated beams (Class 5). Beyond the main span, at the eastern end of the viaduct, there was a 25ft span over a road on the same angle of skew. To compensate for this angle between the eastern approach spans and that over the canal an additional span of triangular appearance when seen from above was necessary. This gave a full span width when viewed from one side of the viaduct, but was absent when viewed from the other.  In the case of Bourne Viaduct, although most of the intermediate piers were timber trestles, the abutments at each end of the viaduct and the piers on each side of the main span over the canal were of brick. When skewed piers were also timber the same method was used but the layout on the short side could be somewhat different. There is a drawing of a span of Bourne Viaduct with a variation of the QDT type truss having a wrought iron tie beam instead of timber. Despite appearing on a composite drawing of 12 types of timber span design, undated but probably from c1846, it does not appear on other later drawings of the viaduct.

Capel's and Canal viaducts, effectively one structure, seem to have had a rather complex history. The name Capel's comes from one of Stroud's cloth mills owned by John Capel, part of which had to be demolished to build the viaduct. The eastern end of the viaduct consisted of eighteen Soft spans of the usual QDT type, with a nineteenth almost completely buried in the embankment that does not seem to have been counted as a span in available sources. Then came a 40ft adjusting 'half span' to allow for the 55° skew of the canal span, followed by a further adjusting span of 38ft and two final 28ft spans. The abutment at the western end of the viaduct was of masonry. The short sides of the adjusting spans were bridged by one  20ft and one 10ft 10in truss containing only king posts rather than the usual queen posts, in view of the short spans on that side of the viaduct. It is not clear when this viaduct was completed. Plans were discussed in 1858/9 and a Board minute even recommended that, to ensure reconstruction of Capers Viaduct within the stipulated time', strong Staffordshire bricks should be used instead of stone, followed by a tender for iron girders, but little appears to have been completed as the structure was still insured as a timber viaduct by the GWR in 1881. It appears that rebuilding was in stages from 1859, with the canal and river spans being tackled first but the rest of the viaduct still being timber into the 1880s.

Watts Viaduct was originally built as a standard QDT type but plans drawn at the time of replacement show that various additional struts and supports were added later, as well as low brick plinths to the piers. The uprights of the trestles were strengthened by further timbers and horizontal tie beams were added roughly halfway between the bottom beam of the trusses and the ground to add longitudinal stiffness. The last span at the western end of the viaduct was provided with an upright in the middle of the span. An angled strut beneath the corbel was also located in the brick abutment. A drawing of Stratford Viaduct, also made at the time of its replacement, shows that a number of alterations had been made. Like Watts, additional uprights had been added to the trestles, and the middle 40ft span had been strengthened with diagonal struts rising from the low brick plinths supporting the trestles to a straining cill 13ft long placed beneath the bottom beam of the truss. A longitudinal tie beam had also been added between the two trestles of the centre span at plinth level. Carpenter's Viaduct had been similarly treated, and of its four 32ft spans the middle two had received the same strengthening as the centre span of Stratford Viaduct and the outer two had additional supporting uprights at the midway point of the truss.

Of the remaining road overbridges listed, only drawing No 17 is of note. This spanned both the B&GR and the C&GWUR just south of Standish Junction where the two lines were on different levels, the B&GR being 9ft lower. The spans were laminated beams with diagonal struts rising from the trestles to straining cills, and the untrussed parapets were boarded. 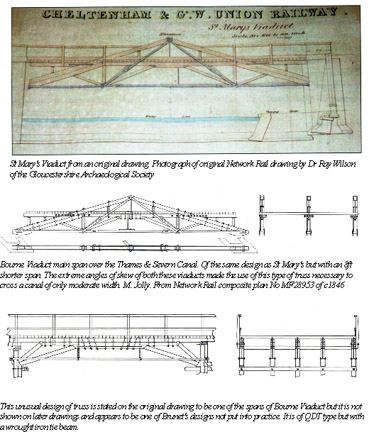 Robert Pearson Brereton (4 April 1818- September 1894) joined Isambard Kingdom Brunel in 1836, aged 18, and became his chief assistant in 1844, aged 26. Brunel described him as "a peculiarly energetic persevering young man". He worked on the Royal Albert Bridge across the River Tamar at Saltash, and supervised nearly all stages of construction because Brunel was first too busy then too ill to attend. Brereton took over responsibility for completing various projects when Brunel died in 1859, finishing the West Somerset Railway in 1862. The young Brereton had lost an eye in an explosion while working at Paddington on the Great Western Railway. He is depicted with a black eye patch in a mural in the Hayward Room of the SS Great Britain in Bristol. There is a memorial brass to Brereton in the church at Blakeney. 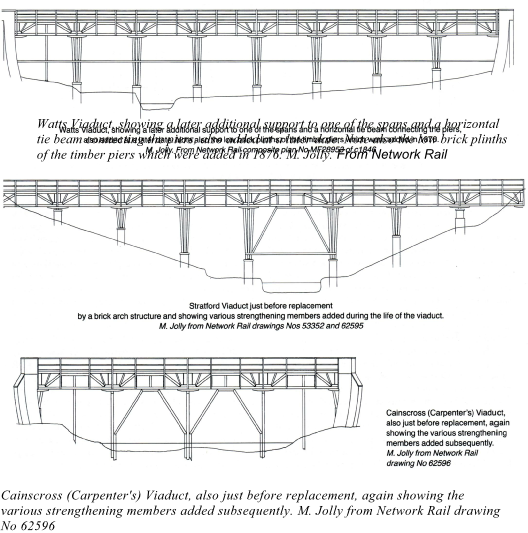 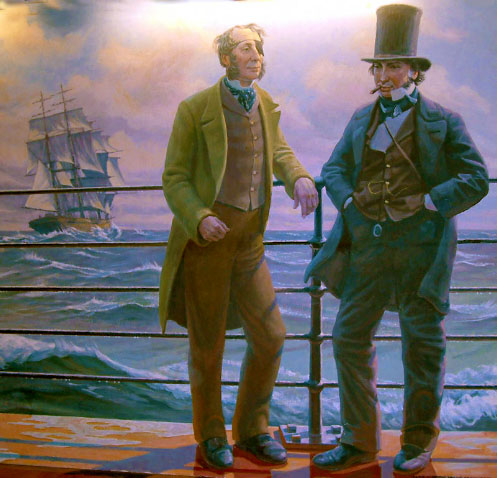 Detail of typical spans of Capel's Viaduct. The use of wrought iron bolts, including key bolts above the trestles, can be seen and the dimensions of the various parts give a good idea of the scantlings used on other viaducts on this line. The smaller trusses needed to compensate for piers placed at angles other than 90° to the railway to suit the course of the waterway below are also shown. Network Rail plan No 28257 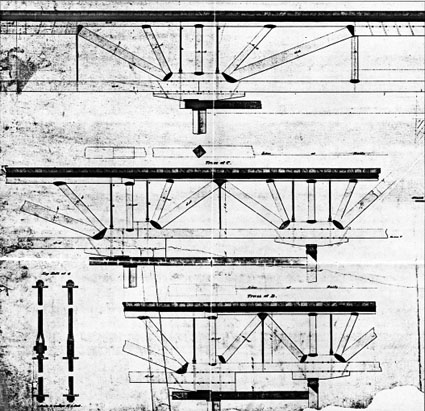 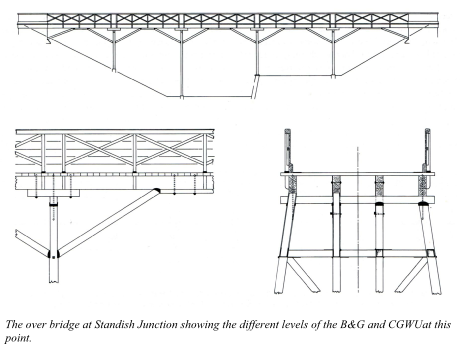