From Swindon the line sweeps away from the Bristol main line in a north-easterly direction and runs between the engine and stock sheds on the north side and the main works on the south. Three miles later it passes the oil-storage depot of Bremell Sidings which were laid in 1943. 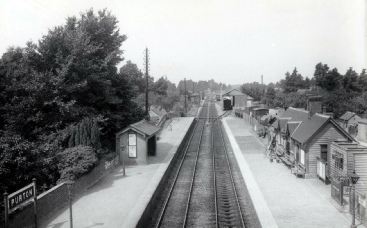 The first station on the line was Purton, some 4 miles from Swindon. This station lay to the west of the Cricklade to Wotton Bassett road and consisted of a wooden planked building on the up platform and a small waiting shelter on the down. It had a small single road through goods shed off a passing loop and a loading dock. Storage sidings were later added to the east end and west sides, while the signal box lay to the west of the down platform. 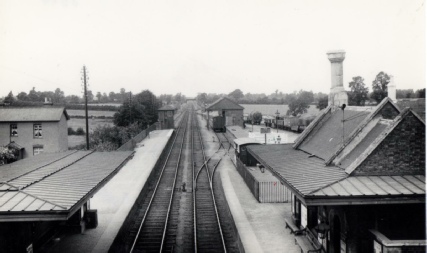 Minety, four miles further down the line. was an original station of the Brunel Chalet design. The down platform was given a long waiting shelter with a low over-all canopy. Like Purton, its goods shed was on a passing loop, the storage sidings and signal box lying to the west of the down platform. Officially known as Minety and Ashton Keynes from the 18th August 1905, it was two miles from the latter which was more centrally served by the Midland and South Western line. 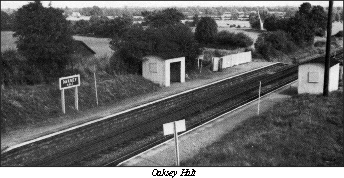 Oaksey, three miles from Minety, was an unstaffed halt with only crude waiting shelters. It opened on the 18th February 1929. 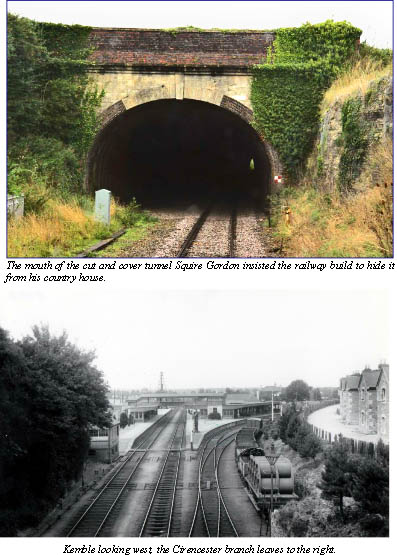 Although serving only a small village the station thrived, because of its wide catchment area of surrounding villages. Kemble station opened on 3lst May 1841, but owing to Squire Gordon's condition that no passenger station should be built on his land, the original wooden platformed station was used solely for changing trains. The station for the village was a mile further down the line. Kemble did not appear in public timetables until May 1882. The station had undergone extensive rebuilding prior to the official opening, including the replacement of the wooden platforms. Built in Cotswold stone, the station was designed in the neo-Tudor style and was given generous platform awnings. Miss Anna Gordon only allowed Kemble station to be built on condition that there was no refreshment room where intoxicants could be sold. Not until 1948, when the estate changed hands, was an inn opened near the station. 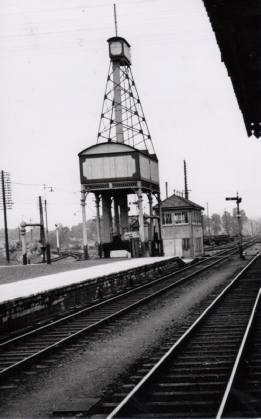 One striking feature of the old station was the secondary water tank set high above the main tank on a gantry. This served the village water supply.

In 1903 a well was sunk at Kemble and a steam pumping plant installed, built at low level just to the west of the main signal box. This was to provide water to the ever expanding Swindon locomotion and carriage works. The need to pump water from Kemble was due to the high salt content of the Swindon water. In 1935 the pumps were changed to electric power, but the steam pumps were retained for emergencies. On the first Thursday of every month a light tank engine would travel down from Swindon to keep the standby pumps in working order. If the electricity supply failed a pannier tank would be sent from Swindon and the pumps worked from the engine's injectors. In the case of a burst pipe a light engine and shunter's truck equipped with a search light would be sent from Swindon and inspect the trackbed. Should  the down line be affected then single line working implemented. In 1971 a new well with electric pumps, supported by diesel stand-by, was employed, the old plant  being scrapped. A slight hollow is now all that remains of the site.

Kemble was not only the termination of the Cirencester and Tetbury branches but also of the Swindon local service. It initially had no goods facilities, all goods being handled at near by Tetbury Road. Later, loading bays were added and c 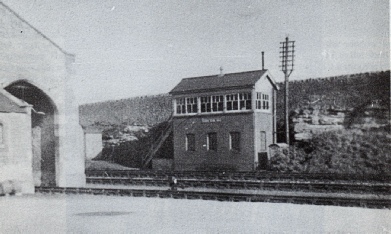 A mile westwards lay Tetbury Road station opened in April 1845, but closed to passengers when Kemble station opened in May 1882. It was renamed Coates on 1st May 1908 and continued as a goods depot until June 1963. It had a stone goods shed on a passing loop and storage sidings laid to the west of the station.

The line ran almost level from Swindon but after Coates the gradients started to increase to 1 in 100 as far as the summit in Sapperton. Tunnel At the Swindon end of the tunnel lay Sapperton Sidings and it was here that the banking engines which had assisted trains up through the Golden Valley changed tracks to return to their home station. The layout of crossings and sidings were generally completed by 1880 although small alterations have taken place since.

Kemble water tower with the village tank on girders above. 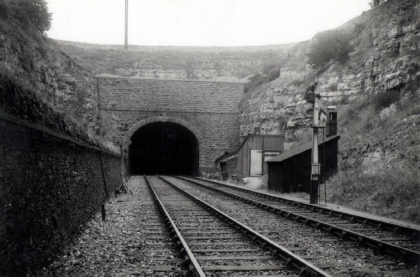 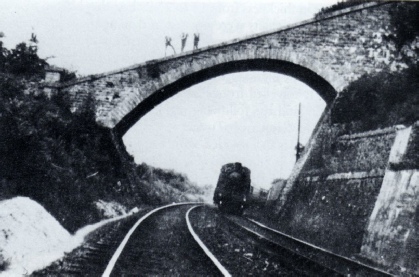 Skew Bridge between Sapperton and Chalford. Designed for moving lumber down to the canal