The first locomotives to run on the line were 2-2-2 single drivers. It is known that “Lion” from Sharp Roberts was used on the opening day. 1840 saw the Sun class  “Meteor” locomotive in use, but by 1841 trains that ran through to London were being hauled by members of the Firefly class, “Greyhound” being one of the engines in use.

All Collett class locomotives used the line except for the Kings which were restricted. It was not until after the introduction of High Speed 125 trains to the line that the fist King class, ‘George V’, ran on a special. Collett 0-4-2 tanks fitted for auto working were the mainstay of the Chalford autotrains after the demise of the railmotors while 0-6-0 saddle tanks and 2-6-2 prairie tanks were used on workmens’ trains and short pick up goods.

The most unusual sight witnessed on the line was London underground stock returning to Gloucester Carriage Works for overhaul. obviously not under their own power. Cheltenham Gold Cup saw many specials running from Paddington to the races, including the Royal train in the charge of two gleaming Old Oak Common Castles.

After the demise of steam, diesel hydraulics took over the London and Swindon trains, these eventually being replaced by diesel electrics. Later Class 101 diesel multiple units, the first used in the West of England, were in service between Swindon and Cheltenham. More recently these were replaced by Sprinters and the loco hauled trains were replaced by High Speed 125 units. 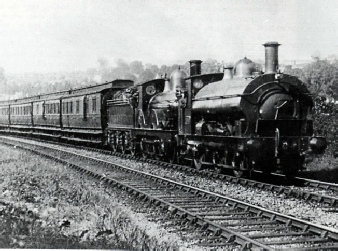