Although the Cheltenham Spa Express was the only named express train that used the entire line, other notable expresses either crossed or used part of it.

The Cornishman started its days as a broad-gauge express running between Paddington and Penzance, and wa 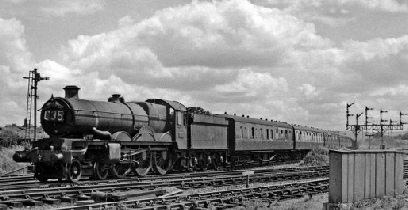 s the last broad-gauge express to do so. In 1904 when the Cornish Riviera came into operation the name of the Cornishman died. But in l952 it was reborn, running this time, not from Paddington, but from Wolverhampton, via Birmingham, Stratford-on-Avon and Cheltenham Malvern Road. It used the joint line to Gloucester then the Midland's Bristol and Gloucester as far as Yate, where it spurred off line as to the Wotton-South Wales main line and ran down into Bristol via Filton. The Cornishman the travelled via Exeter and Newton Abbot to Penzance. When the Honeybourne line was closed the express used Birmingham New Street and approached Cheltenham by way of the Lickey incline, running through the Lansdown station. The last run on the Great Western route was on the l0th September 1962 when the express was in the charge of the Castle class 7001 "Sir James Milne". The next day, on the Midland line, it was diesel hauled. Later its source was altered to Bradford, until l975 when the title was disregarded .

The Devonian ran from B 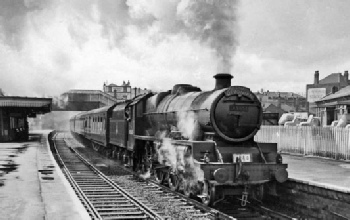 radford to Paignton and was conferred its title in 1927. It left Bradford at 10:25am and arrived in Paignton at 6:51pm. The express ran via Birmingham New Street and Cheltenham Lansdown to Gloucester Eastgate, from where it travelled to Paignton via Bristol and Exeter. The service was abandoned during the Second World War, but was reinstated in 1946 with a journey time of eight and three quarter hours. A few years later the timing was altered to nine hours thirty seven minutes to Kingswear, a few miles further on, but in the winter months it terminated at Bristol and was untitled. From May 1962 it ran non-stop from Birmingham to Bristol using the Gloucester avoiding line, the over all timing being seven hours fifty minutes, an hour shorter than the 1927 run. During its final years the express was pulled by the Peak class diesels, until 1975 when the title was dropped.

Probably the most famous train t 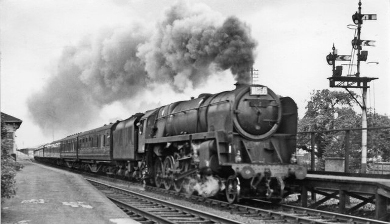 o pass over the Cheltenham metals other than the "Flyer" was the Pines Express, the LNWR and LSWR's joint express service between Manchester and Bournemouth Initiated in August 1910 the Pines took. only 1 3/4 hours to cover the Manchester to Birmingham stretch. From there it ran to Bath via Gloucester on the Midland route then to Bournemouth on the Somerset and Dorset. The service was suspended during the First World war and it was not until 1927 that it was reinstated. Bournemouth was reached 6hrs 27 minutes after departure from Manchester, the slowest section being the long climb through the Mendips on the Somerset and Dorset line, where it was often double headed. The express's hey-day was certainly on summer Saturdays when in the height of the holiday season a relief train was run. Withdrawn for the duration of the Second World War, it ran again on 7th October with a timing of 7 hours southbound. The closure of the Somerset and Dorset line in 1962 meant the Pines was diverted via Oxford and in March 1967, with the electrification of the lines through Birmingham, the Pines Express ceased to run.