After the First World War the Great Western introduced an afternoon service from Cheltenham to Paddington, via Gloucester, arriving at 5pm. The Great Western policy of accelerating its express trains led, on the 9th July 1923, to the introduction of the Cheltenham Spa Express.

The Company decided to lay claim to the world's fastest express train, a. honour then held by the LNER. The Swindon-Paddington section being level and well aligned was an ideal stretch, and the Cheltenham train was selected. Its timing over the 77.3 miles from Swindon was cut to 75 minutes which required an average speed of 61.8mph.

World train speeds were increasing, and to hold on to the record in July 1929, the time was cut to 70 minutes, an average speed of 66.2 mph. In 1931 the Canadian Pacific and Canadian National Railways were in competition for the traffic between Montreal and Toronto and the CPR cut its time to 108 minutes for the 124 miles, an average speed of 68.9 mph.

World train services after 1933 had generally increased, partly due to the introduction of electric traction. By 1939 the "Flyer's" 71.4 mph schedule held a place well below the hundredth in the world speed records. The LNER then recaptured the British title from the "Flyer" with its streamlined "Coronation", running between London and York.

The best journey made by the "Flyer" was on June 6th 1932 when the 77.3 miles from Swindon to Paddington were covered in 56 minutes 47 seconds, at an average speed of 81.7mph. For 70 miles between mile posts 72 (Shivingham) and 2 (near Westbourne Park) an average rate of 87.5 mph was maintained, though this was beaten in 1935 by the LNER "Silver Jubilee". The four cylinder "Tregenna Castle" No 5006 was usually responsible for working the train with a usual load of 6 bogie vehicles, weighing 1

It was only between Swindon and Paddington that the "Flyer" developed any turn of speed and over this section the schedule demanded a sustained speed of 80mph. The train was made up of a six coach set comprising of a third class brake, corridor composite, restaurant car, third class, corridor composite, and a third class brake. Leaving St James station at 2:40pm and calling at Malvern Road, it ran down the 7½ miles to Gloucester in 13 minutes, usually in the charge of a tank engine. Here reversal was necessary and the main engine was backed from Horton Road shed and attached to what was the rear of the train. At the other end a through coach from Hereford was attached. Departure from Gloucester was at 2.58pm and then to Stroud, Kemble and Swindon. The 44¼ miles from Cheltenham to Swindon took 71 minutes, a contrast to the high speeds attained after Swindon. 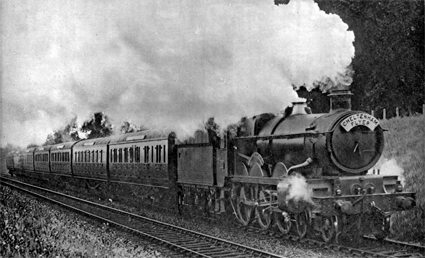 s at 3:55pm and Paddington was reached at 5pm. There was no corresponding down service, the stock and engine returning on the l0:45am train which was semi-fast. On the day of the 1932 record run, arrangements were made to run the 5pm down train from Swindon in one hour. This train was normally fast to Kemble but a stop was scheduled for this day at Swindon. The Castle Class "Manorbier Castle"  No 5005, worked the train with a load of 205 tons. The 5:15pm express from Bristol then made a special stop at Swindon to pick up those passengers who had been recording the timings and return them to Paddington in 66½ minutes.

The train was taken from the timetable during the war but with the acceleration of post war services the Cheltenham Spa Express reappeared running up in the morning and down again late afternoons. This gave the Western Region an excuse to reintroduce the chocolate and cream colour scheme to their new style coaches. By 1962 a timing of 2 hours 35 minutes was achieved for the Cheltenham-Paddington run compared with 2 hours 20 minutes in the 1930s. The down Cheltenham Spa Express, which from the early l960’s called at Swindon, made the first stop in 70 minutes, similar to the 1929 timing.

With the new connection laid at Standish Junction in 1964, it became possible for Paddington trains to run directly into Eastgate station, using the Midland metals, and run on to Cheltenham without reversal. The down Cheltenham Spa Express reached Gloucester at 6:56pm and Cheltenham at 7:16pm, terminating at Lansdown Road. In the opposite direction the starting time was at 8.10am from Cheltenham, 8:21am from Gloucester and arrival at Paddington was at 10:35am.

With the downgrading of the railways just after the Beeching "axe" and the introduction of diesel traction on the line, trains failed to carry the name board, and the title was gradually dropped from the timetables. However in 1984, with a more publicity conscious railway, the Cheltenham Spa Express reappeared for a third  time. This time it was one of British Rail High Speed 125 mph diesel trains, calling at Reading, Swindon, Kemble, Stroud, Gloucester and Cheltenham Spa. The down train left Paddington at 10:10am and arrived in Cheltenham at l2:04pm. The up train leftCheltenham at 1pm and arrived in Paddington at 2:55pm, the journey taking just under two hours, only twenty minutes faster than the "Flyer" of 1930. 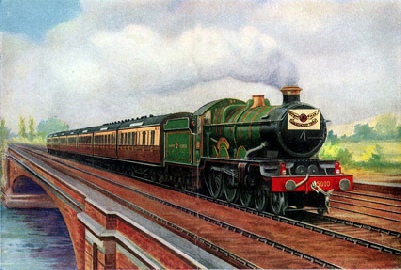 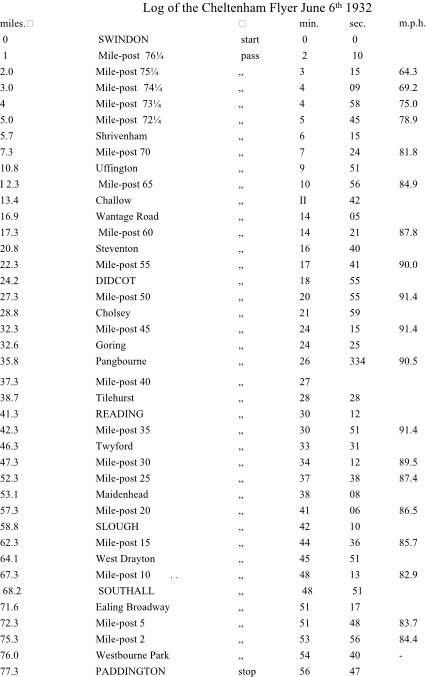 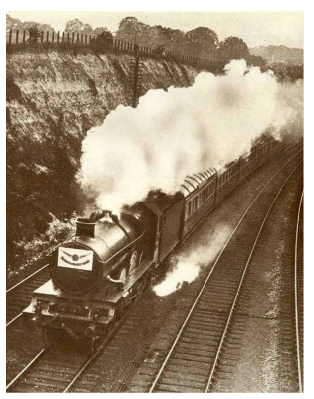 The Flyer on its record breaking run