Following the success of the railmotors in the Stroud valley, the Great Western began a road motor service in the area on the 9th January 1905. It ran from Stroud station yard through the town to the Falcon Hotel in Painswick, with stops at Pakenhill Road (as spelt on the ticket), Salmon Springs, Pitchcombe (Halfway House), the Eagle, and Painswick. The bus had to be stored in the yard of the Falcon Hotel until a corrugated shed could be built in Stroud. This shed had survived demolition and was used as a store. The building stood in the rear yard under the shade of the old Hill Paul's clothing factory, and until they were demolished at the end of the steam era, under the twin water towers. The shed was later painted in black tar, covering the Great Western colours. Additional doors were built into the upper part of the shed to allow double decker buses to use the garage. 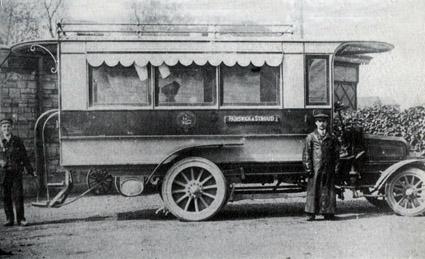 The single deckers were of the Milnes Daimler 20hp open sided design, although some had roofs. These were later rebuilt as enclosed buses. The double deckers were built on the same chassis, the top deck being open.

The service proved popular and on 1st March 1905 it was extended to Cainscross. On this date double decker buses were introduced into the area to run a supplementary road service to assist the railmotors which were working to capacity. By the 10th June additional railmotors came into service and the short lived Chalford motor bus was withdrawn. So too was the Cainscross extension which had not proved as successful as the GWR had hoped.

In Cheltenham a local service was introduced on 1st February 1905 to run the 11 miles to Winchcombe where  the building of the Honeybourne line had reached. On the 1st June this was cut to Bishops Cleeve and finally withdrawn on 1st August when the line had reached Cheltenham.

On the 4th October 1906 the GWR buses returned to Cheltenham with a service from Painswick. This was separate to the Stroud route but a through service was running by the end of the year.

During the First World War the buses were converted to gas running at the Slough GWR repair shops, petrol being now in short supply. The gas holders were sited on the roofs of single deckers and on the top deck of double deckers.

From 1919 ten AEC motors were introduced in the Penzance and Paignton areas and at least one of the Maudsley buses they replaced was sent to Stroud. From July 1921 the Great Western withdrew the through bus to Cheltenham, running it only to Painswick. This was an arrangement with the National Company who were now established in Stroud and agreed to withdraw their weekday Painswick bus if they could have the monopoly of the Cheltenham run.

From 1922 the Milnes Daimler buses were withdrawn and replaced by AECs. In 1925 Stroud garage was equipped with new Burford busses. In 1926 two short routes were introduced into the area, to Rodborough on 30th May, and Kingscourt on 26th July, the Painswick bus being extended to Cranham from 1st August for summer Sundays only.

1927 saw the introduction of a summer "Land Cruise", using Maudsley charabancs. This cruise travelled from Stroud to Oxford via the Forest of Dean, Wye Valley, Malvern Hills and Stratford on Avon. The trip lasted six days and cost 12 guineas. The "Land Cruise" idea was successful and repeated the next year. Gloucester was the destination of another of these cruises, originating in Didcot.

Oxford and Cheltenham were never thought to be suitably linked by rail so on the 29th October 1928 an express coach service was introduced between St James and Oxford, via Witney and Northleach, using the coaches from the “Land cruises”, and a Maudsley coach.

The Western National, which had almost total control of the Stroud area, came to an agreement with the Great Western on the 30th August 1929 and the Painswick, Rodborough and Kingscourt services were taken over including the vehicles. The Cheltenham to Oxford buses survived under GWR ownership until the 8th February 1932 when they were passed to Black and White Motorways, operated by Bristol Tramways.

The Red Bus Company had been running a twice daily coach service from Stroud to London from the early 1920’s using Thornycroft coaches. Setting out at 9am and 3pm the fare was 15 shillings (75p) return. By the 1930’s the journey had been extended to Gloucester and the coaches replaced by Leyland Tigers. The Black and White Company had also been running a London service from Cheltenham for some years. These coaches had restricted seating capacity of  30 to 50 passengers compared to that of an express passenger train and so could have had presented little competition for the railway.

The Falcon at Painswick

The corrugated iron bus garage at the rear of Stroud Station. 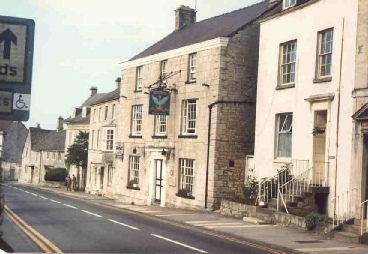