The Great Western Railway's accident record has always been a good one, as they were a safety conscious Company and instilled this into their staff. It is not surprising, therefore, that the accidents on the line were few and far between. It seems that most problems occurred at the footpath crossings of which there were many between Chalford and Stonehouse. Both Brimscombe and Stroud received footbridges to prevent such accidents.

Charles Richardson, the lines engineer, prepared a paper on "Presence of mind" detailing incidents in which people became mesmerised when crossing tracks and finding trains looming down on them. The first he recalls was a railway policeman who was controlling Purton embankment slip, but he was fortunate enough to jump clear at the last moment. A carpenter who walked over a boarded crossing at Brimscombe, before the days of the footbridge, found himself facing an up express. Despite the efforts of a ticket collector who tried to save him, the engine struck the carpenter and he was killed, although he had time to have walked over the crossing several times in safety. A similar fate happened to a woman at Stroud. She too became ‘fascinated’ while walking over the level crossing and died as her niece looked on.

Richardson also describes the near fate of the Chalford permanent way inspector, David Jones, who had the habit of crossing to the other line if he saw a train approaching him. This almost cost him his life when he was caught by a train on the other line. Unfortunately fate was not so kind to two plate layers who were working in Sapperton tunnel during the late afternoon of 13th April 1896. To avoid a down train they stepped across the tracks straight into the path of an up train. It is presumed that the noise of the down train had masked that of the up train.

On 15th September 1844, two men were killed by a rockfall in Sapperton Tunnel while they were boring explosive holes 10 feet below the surface.

There was, of course, the incident at Standish Junction in 1848 when a Midland express collided with a Great Western goods train, the GWR claiming it was the Midland's driver's fault, until evidence was taken from the signalman. 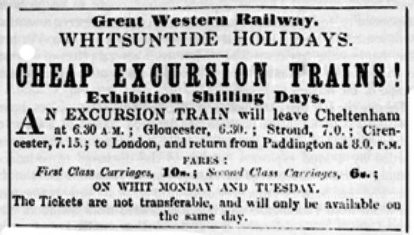 A collision occurred at Brimscombe in the Summer of 1851 when an excursion train to the Great Exhibition in London with some 1200 passengers on board broke loose and ran back into the path of an on-coming mail. The train had set out from Cheltenham, additional coaches joining on route. Because of its 23 coach train a pilot was added at Brimscombe. When the driver emerged from Sapperton tunnel he realised that 13 coaches were missing. The pilot engine was sent down to find the missing coaches. A coupling hook was found to have broken sending the thirteen coaches unchecked down the Sapperton bank. Seeing the impending danger  the mail's driver had the presence of mind to reverse his train and soften the impact. In fact so gentle was the impact that the coaches were afterwards taken on to Tetbury Road by the mail. The driver of the mail was hailed a hero by the local press. As a result of this the Board of Trade Inspector suggested that  telegraph be installed between Sapperton and Brimscombe. He blamed the fact that safety side chains had not been secured on the coaches as these would have prevented the main coupling failure. 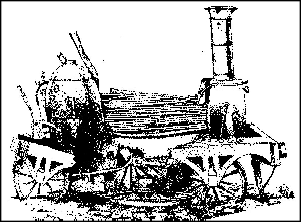 On the morning of 7th February 1855, 2-2-2 Firefly class locomotive ‘Actaeon’ exploded in a siding in Gloucester. Parts of the engine reportedly flew great distances, but even so the engine was repaired and returned to service. The engine had brought a Paddington to South Wales train forward from Swindon but due to a defective coach ‘Actaeon’ was shunting it into a siding when the explosion occurred. Only a switchman received injuries, he was stood near the engine talking to the driver at the time.

April 1878 saw a spate of  stupid acts near Stroud. Large boulders were placed on to the lines before the Saturday mail was due. £10 was offered as a reward and local youths were blamed, but it could not be proved.

Accidents on railway crossings continued showing just how unaware people were of the dangers of a train looming down on them In 1898 a girl was killed crossing the line at Brimscombe on her way to Wimberely mill. After that a footbridge was erected across the tracks at the station. This was built on a Sunday morning with the help of the Brimscombe banker and local the stationmaster Mr Woodyatt.

In the early 1950’s the driver of the down Cheltenham Spa Express reported a lurching as he passed through Sapperton Tunnel. The Brimscombe banker was sent to investigate and found that an original boring shaft into a previous working had caved in taking the track with it.

In 1952 a collision occurred at Gloucester Central station. A passenger train was correctly admitted the occupied main platform by a calling-on signal, but the driver who was working into the station for the first time and in sole charge, misjudged the stop and some of the passengers in the rear coach of the standing train were injured in the resulting collision. The coach was a 3rd  brake and was incorrectly marshaled with the passenger compartment in the rear.

The still of the autumn evening of the eighteenth of October 1961 was shattered when two evening goods trains met head on at Brimscombe, scattering their trucks across the tracks and closing the line. 4945 Milligan Hall on a down goods had been moved to the up line to make way for an oncoming express and was in the process of shunting its wagons when it was hit head on by 6993 Arthog Hall on an up goods. Arthog Hall had run through three sets of danger signals before the impact. Sapperton Tunnel was again the site of an accident on 17 February 1969 when a diesel multiple unit became derailed when a boulder became dislodged in a ventilation shaft by frost. The front bogie was derailed but there were no reported casualties.

On 1st  March 1979, at Naas level crossing on the Gloucester Midland loop, 3 people were killed and 5 injured when a waste lorry crossed the unmanned crossing in front of the Newcastle passenger train. The train crew and lorry driver were killed.

A Woman died when she was hit by train as it approached Stroud in the morning of Thursday 12th January 2012. Passengers on the London-Cheltenham service said they felt the bump as the train struck the woman who ended up under the rear carriage. The train was stopped and the line closed for about two hours, passengers eventually being taken on to Cheltenham by coach. The woman had apparently walked over the viaduct and was nearing the station when the train hit her.

On Wednesday, January 18th 2012, a body was found on the line near the Ham Mill crossing by driver of the 7.04am Westbury to Cheltenham Spa service. The man, a local night worker had parked his car and walked up to the crossing and was hit by the midnight train to Gloucester.

Though not on the GWR, a passenger train overshot the buffers at Nailsworth station in l871 and ploughed into a pile of coal, and on the Midland line to Bristol there was a serious disaster at Charfield in October 1928 when a Bristol bound express ran through signals. Fifteen people were killed. A similar occurrence happened on the Gloucester to Birmingham line at Ashchurch in January 1929 when four people were killed. Fortunately accidents like these did not occur on the Cheltenham and Great Western Union's tracks.