The amalgamation of the two Companies was sanctioned by the Great Western Act of 1844, which also authorised an extension of 1¼ miles from the end of the joint line at Lansdown Road to a station in the centre of St James Square in Cheltenham, and confirmed the repurchasing of the moiety of that line from the Birmingham and Gloucester.

As the power to buy back the moiety of the Gloucester to Cheltenham section depended on the Swindon to Gloucester line being completed by the 2lst June 1845, the Great Western gave priority to completing the line from Kemble westwards. They agreed with the Bristol and Gloucester Company to have the portion from Standish ready for use by April 1844. The whole section was let in four contracts and work began in August 1843. By the summer of 1844 the 7½ miles from Standish to Gloucester had been completed and was opened as part of the Bristol and Gloucester Railway.

The second section from Standish through the Golden Valley to Sapperton had been two thirds completed and ballasted. From Stroud to Sapperton the railway runs for seven miles winding up the Golden valley following the course of the canal. Within this distance there were nine timber viaducts:-

The building of the Capel Viaduct near Stroud had meant the partial demolition of one of the town's cloth mills owned by John Capel.

The timber viaducts were only temporary structures, built to enable the Company to keep to its schedule. They were replaced from 1859 onwards by brick arched viaducts.

Trouble occurred between Chalford and Sapperton when the excavation of a cutting caused the hillside to slip. Edwin Witchell's "Geology of Stroud" states that “it was not without great difficulty and the expenditure of large sums of money that this slip was stayed”.

The third section was limited to the tunnel itself. This had caused Brunel much distress. After the original Act he had revised the plan as there was apprehension to the idea of a 2,730 yard tunnel built on a curve. The amended plan meant a shorter tunnel which was straight throughout except for a small portion near the Chalford end. By 1841 nine shafts had been sunk and the heading was expected to be completed that year.

Because of the Cheltenham and Great Western Union's financial troubles, Brunel was asked to present a third plan with the object of reducing the amount of tunnelling required. Increasing the approaching gradients from Brimscombe reduced the tunnel by some 500 yards. A depression in the ground level meant that a short open cutting could be introduced, near where the Cirencester to Stroud road crosses the tunnel.

In view of Brunel's comments on the proposed Tring line gradients, the revised 1 in 60 climb must have been a bitter pill for him to swallow. When the Great Western had taken control of the Cheltenham Company they let the contract to Jonathan Nowell of Wickwar, under the supervision of Charles Richardson and Robert Pearson Brereton, Brunel's resident engineers. An extra shaft was sunk in the middle of the short section and headings were driven from the old shafts to the new, which at the summit were about 90 feet above the old heading. The abandoned tunnel was filled in and the working shafts covered and sealed. The tunnel lining was complete by February 1845 and the broad-gauge track laid by April. Fisher's "History of Stroud" records that serious accidents occurred during the building of the tunnel and embankments. The casualties were taken to the hospital at Stroud.

Early in May 1845, General Pasley, who was accompanied by Brunel's assistants, R. F. Brereton and C. Richardson, inspected the line and reported to the Board of Trade, describing the tunnel:- "The south entrance of the tunnel is 3 miles, 71 chains from Kemble in a cutting 47 feet deep. After a short portion of tunnelling on an ascending gradient of 1 in 95, 16 chains in length is an open cutting of three chains in length on a level, after which the remainder of the tunnel, 81 chains follows on a descending gradient of 1 in 90, except for a short portion at the north end which descends by a steeper gradient of 1 in 60. The whole length of the tunnel including the short cutting at the summit level is 2,212 yards, or rather more than 1¼ miles; about 80 yards at the north end of which are on the steeper gradient, which before was straight, has been laid out on a curve of 36 chains radius. At its north end it emerges from a cutting 64 chains in depth. This tunnel has been cut through the rock of the great and inferior oolies and Fuller's earth formation, with the shale and beds of shelly limestone.

The rock being of unsound quality with many wide and deep vertical and horizontal fissures, partly filled with clay or earth, it was necessary to line it with masonry and brickwork throughout. The arch is a curve resembling an oblong segmental ellipse, of which the greatest span is 28 feet at the height of 7 feet above the rails, diminishing to 27 feet at that level. Part of it, 433 yards, has been formed with an inverted arch of which the span is 27 feet at rail level, with a versed sine of 2½ feet.

The side walls and invert masonry are generally 2 feet thick, while 20 feet in width of the upper part of the arch has been built with brickwork varying in thickness from 18 to 27 inches, i.e. from 2 to 3 bricks thick. Ten shafts were opened in making the tunnel, of which all have been blocked up except one in the middle of the long tunnel". (A further shaft was added later).

Of the fourth section, from Sapperton to Kemble the trackbed had been ready for the permanent way since the autumn of 1844. 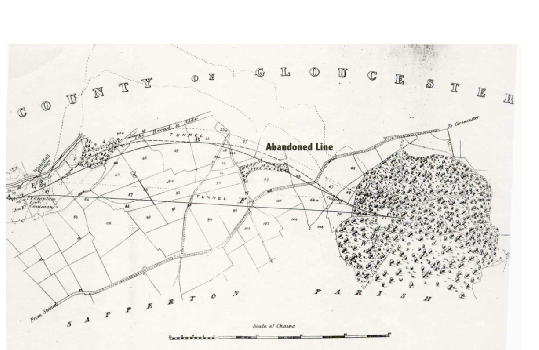 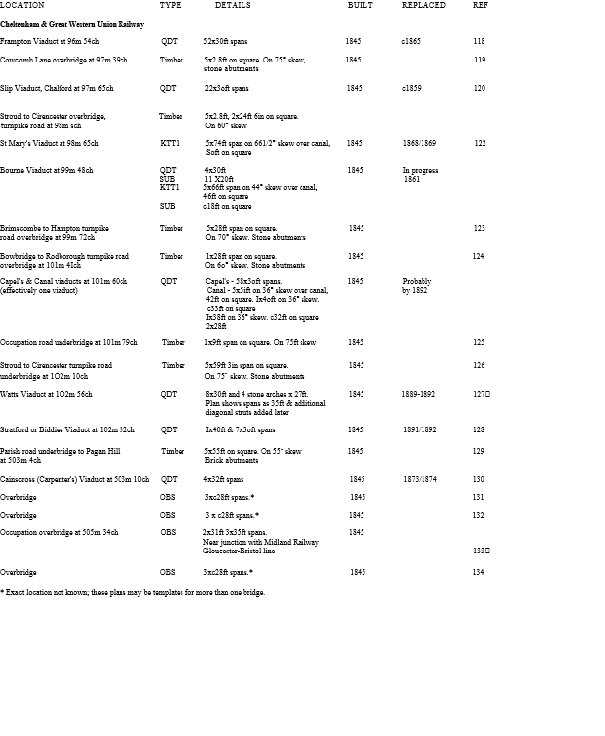 Brick arches cut into the side of the hill at Chalford 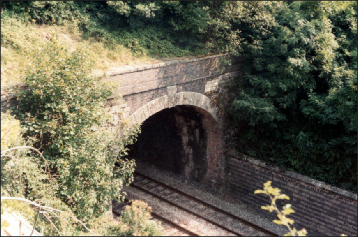 The entrance to Sapperton Long Tunnel 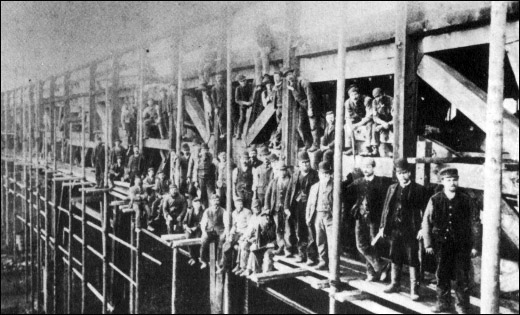 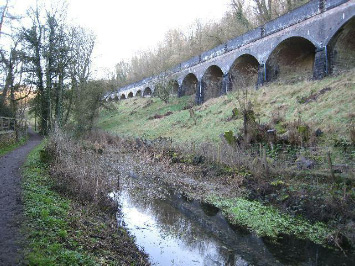