The Opening of the Line

The work between Cirencester and Swindon was nearing completion and the Directors obtained the sanction of the shareholders to lease the portion to the Great Western Railway on the terms suggested in 1837. This lease was for seven years from the date of opening at a fixed rate of seventeen thousand pounds. The Directors, however, were not satisfied with the progress of the work and informed Brunel of the fact. They also censured him for not replying to their correspondence.

The opening, expected for January 184l, was delayed for five months by land slips in the embankment near Purton, five miles north west of Swindon. The embankment was being built by Messrs. E. Oldhams, who were also shareholders. It was about 1.75 miles long and averaged 20 feet in height, being formed of clay obtained from side cuttings, most of it dug in the wet winter of 1840. Several small slips occurred in the following year, and in repairing these the interior of the bank was found to be saturated with water and in a very soft state. At one place it had subsided by 8 feet in 24 hours. To remedy this Brunel tried burning masses of clay on the slopes, and then filled up portions of the side cutting where the foundations of the Bank had given way. The embankment was made good with large quantities of dry rubble and sand.

The work was inspected for the Board of Trade by Sir Frederic Smith, who found it tolerably firm but recommended careful watching. The rest of the line he found in good order and sanctioned the opening, which took place on the 3lst May 1841. The town of Cirencester, instead of being at the end of a branch, found itself temporarily the line's terminus station.

Following the arrival of the stage coach "Era" from Cheltenham, the first train left at 7.15am drawn by the Sharp Roberts Broad Gauge 2-2-2 "Lion" and, after waiting at Swindon for ten minutes, returned to Cirencester.  The opening of the line had an important effect on Swindon as a rail centre as it made it a junction where passengers and goods could be interchanged. At Swindon the erection of workshops for the repair of locomotives was agreed, and the works were built on land owned by the Cheltenham Company. The agreement provided that the Company had requisite accommodation for the stabling of engines and also that separate accommodation was made for Cheltenham line passengers at the station. As far as the intended junction at Kemble the line was double, then single to Cirencester. All track comprised of bridge rails weighing 54 to 60 lbs to the yard on longitudinal timbers. There were stations at Purton, Minety, and Cirencester. Disc and crossbar signals were used.

Soon after the opening the embankment began to move again. Fortunately the slips were confined almost entirely to the east side, so it was  possible to keep the down line open for traffic as a single line worked by a pilot engine. In spite of Brunel's efforts

matters got worse in the autumn, the up line subsiding several feet below the level of the down, which was kept passable and in use. At one stage, however, a crack appeared in the down line side of the embankment. Charles Richardson, the line's resident engineer, was at this time residing near Kemble and had a pilot engine permanently kept in steam for emergencies. He was able to travel on the engine, running on the wrong line, to inspect the damage, which he described as "the worst that had occurred to that time".

Early in December a nervous traveller wrote from Cheltenham to the Board of Trade: "I returned by the railway, and as far as Swindon all was well, notwithstanding the wet, but from Swindon to Cirencester I was horrified at seeing the road I was passing over, and nothing shall tempt me to do it again. One of the rails had slipped for a mile or two completely away and the trains travel on the other line, which appears to be hanging by a thread, and this on a precipice of 40 to 50 feet". The result of this letter was a visit by General Pasley in January 1842, who, observing the gross exaggeration of the letter, described the situation, reporting as follows:- "Fortunately the ground on the western side of the embankment remained firm, so that the slips took place on the eastern side only, where the clay, almost in a fluid state, gave way and moved towards the adjacent cutting, this movement taking place below the surface, as was proved by the remarkable fact that some very strong piles which had been driven at the bottom of the embankment, were forced out of their original line, moving along with the clay, and in one part in particular some of them are now seen 70 feet in advance of their former position. This movement was descried to me as being very slow so that if carefully watched, and men being stationed to stop trains, no danger can arise from it. But it was so powerful on the east side that the ground under the rails there sank no less than three feet in 24 hours in the worst part.

To make good the embankment Mr Brunel had cased soil of a better quality to be brought from a hill at the north end of it, and to be continually laid on the east side using the rails on that side for transport of this earth, and having found piling to be of little use, he has directed a dry wall of rubble stone, 12 feet thick, to be built at the bottom of the slope to the depth of 10 feet, which is equal to that of the cutting, as a retaining wall, to prevent the further movement of the base of this embankment towards the ditch or deep cutting on that side; which as a further precaution he has ordered to be filled up opposite to those places where the greatest movement of the moist clay took place. These measures will no doubt, prove effectual, for, as I said before, the western line of rails is perfect throughout, and the eastern line is now only about 15 inches lower than the other in the worst part, and is being gradually brought up to its proper level, which Mr Brunel hopes to accomplish in four or five weeks". The contractors filed a claim against the Company of non-payment for extra work carried out on the line, amounting to about six thousand six hundred and nine pounds. The Cheltenham Company decided not to fight the claim and promptly settled.

The initial service was only a shuttle from Swindon, connecting with the London trains. These ran at about two hourly intervals on weekdays, with three trains running on Sundays. Paddington was reached in three hours forty minutes, including the change at Swindon. The single fare from Cirencester to Paddington was 25 shillings first class, 18 shillings second class, and 11 shillings third class. Carriages were charged at 35-40 shillings and horses at 41 shillings.

The Directors had done nothing towards proceeding with the line from Kemble to Gloucester apart from making conditional contracts for the required land and letting the contract for the heading through Sapperton Tunnel by the end of 1841. From this time their main object, with the apparent approval of the Proprietors, seems to have been to get rid of the whole undertaking and responsibilities as soon as possible. William Hyett had resigned as Chairman in the summer of 1840, Norwood Tyre of Leckhampton Court, the Deputy Chairman, temporarily taking his place. In the following November, C.F. Sage of Gloucester was elected Chairman.

After the passing of this Act, the Directors lost no time in negotiations with the Great Western Board for the sale of the undertaking. For some months the Great Western would not entertain anything other than a lease of the line when finished, with the assistance in raising the necessary capital. On the 12 October  1842 the Cheltenham Company made the following proposals to the GWR:-

1. The Cheltenham Company would complete the line and sell it for eight hundred and sixty thousand pounds, exclusive of the half-line from Gloucester to Cheltenham. The two Companies would then amalgamate.

2.  The fee be reduced by one hundred thousand pounds, the GWR now giving 2750 of their shares.

3. The GWR enabling the Cheltenham Company to raise nine hundred and sixty thousand pounds to complete the line then rent it for sixty two thousand pounds a year for ten years or until all liabilities  were paid.

4.  The Cheltenham Company would complete the line, the GWR taking out a 99 year lease and paying a lease fine of one million and fifty pounds plus an annual rent of thirteen thousand pounds.

The GWR declined these proposals as they did not wish to pay rent on the line. Eventually in January 1843 they agreed, with the sanction of their shareholders, to buy the completed portion from Swindon to Cirencester and all the rights and powers of the Company including that of the repurchasing of the moiety of the Gloucester to Cheltenham line and the tramway, for 3,000 Great Western half shares of fifty pounds each fully paid, and eighty thousand pounds in cash. These terms were unanimously accepted at a special meeting of the Cheltenham and Great Western Union Company Proprietors, held in the Company offices in Cirencester on the 14th February 1843, and finally ratified at a second meeting in August.

The transfer took effect from 1st July 1843, and for two hundred and thirty thousand pounds additional capital the Great Western acquired the unfinished undertaking on which the Cheltenham Company had managed to spend more than six hundred thousand pounds. A final account of the latter, made in December 1846, after all liabilities, shows that the shareholders received one Great Western half share, worth in the market, about eighty pounds, and 17s  6d cash for every two shares they held, on each of which they had paid eighty three pounds. Of the 5,693 existing shares the Great Western held 392. The rest of the original 7,500 had been forfeited for non-payment of calls. 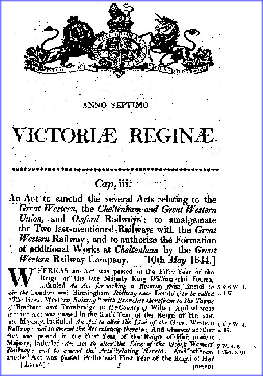