Having obtained the Act, a provisional committee of the Company met in Cheltenham on the 28th June 1836. The meeting, chaired by Joseph Viner, composed of::-

The meeting elected William Hyett to the Chair and Joseph Viner to the Deputy Chair. I..K.. Brunel was appointed Engineer, C. Lawrence and I. Griffith the Solicitors and Messrs. Pitt Gardner and Co. of Cheltenham, the Treasurers.

On the l2th July 1836 the Committee met again in Cheltenham, this time with Norwood Tyre, the Leckhampton quarry owner, as a director. The need for a London office was expressed at this meeting in order to arrange the dealing of shares. The GWR offered accommodation and this was accepted. The Directors were also informed that their selection of Treasurers breached the Act as the post should be filled by individuals and not a Company. The Pitt Gardner and Co’s appointment was therefore, rescinded. An additional two hundred and fifty pounds was paid to Squire Gordon to cover his "expenses". Negotiations for the purchase of land were progressing, varying from one hundred and seventy five pounds to two hundred and fifty pounds per acre.

The following meeting, two weeks later, discussed the renewed Tring proposal and it was decided to send a deputation to lobby Parliament and also seek the assistance of the GWR.

On the 9th August new Treasurers were appointed William Pitt of Cheltenham, Joseph Watts of Stroud and Fredrick Cripps of Cirencester. The Tring deputation reported and it was decided that ten thousand pounds be set aside to assist the GWR in the fight. A letter from the Company appeared in the local press at this time, promising shareholders that work would commence when the corn had been harvested. At the end of August 1836 the Directors announced that the registration of shareholders would be required by the l5th of the following month.

The first Annual General Meeting took place on the 6th October 1836 and was held in the Masonic Hall in Cheltenham. The Directors were officially appointed, William Agg and Charles Stephens now appearing in the Directors list  It was proposed to pay the Directors an annual fee of eight hundred pounds but this was raised to one thousand pounds after a vote. The Directors stated their intention to commence purchase of the necessary land and made a call of five pounds per share to be made by the l9th November. The subscriptions were not, however, fully forthcoming.

Squire Gordon appeared before the Directors in October l836 and claimed his full compensation whether or not the Cheltenham Company took his land. He said that he wanted similar treatment to that given to the Thames and Severn Canal Company. After some discussion he withdrew stating that he would only claim if land was taken. At this ime the Company was also having difficulty securing the co-operation of Brunel, as they could not obtain from him any assurances as to the date of commencement of the work.

A month later the Company was feeling the effect of the lack of finance and secured a loan from the GWR which was used to pay the Thames and Severn Canal Company and the Cheltenham Tramway. Fears were starting to be expressed in the local villages about the proposed influx of railway navies and this prompted a letter from Mr. F. Neve of Poole Keynes Rectory, expressing his opinions on the distasteful habits of the navvies.

In November 1837 the Directors reported that the condition of trade had now improved and they were considering where to commence operations. After discussions it was decided to start on the Swindon to Cirencester section, so that as soon as the Great Western had reached Swindon a continuous line would be open from London to Cirencester. Stage coaches would then complete the journey to Stroud, Gloucester and Cheltenham. A conditional agreement had been made with the Great Western for a short lease of the completed portion at a rent of seventeen thousand pounds a year, a satisfactory return on the thirty five pound share which they intended to call up for this  purpose. The Directors then applied to Parliament for an extension of time to build the rest of the line. This was granted by the 1838 Act which also approved a revised plan for the routing of the Sapperton Tunnel.

This course of action did not favour the Directors of the Birmingham and Gloucester Company who had been working on their own line and were dependent on the Cheltenham Company for its completion to Gloucester. They obtained clauses in the Act to ensure that if the Cheltenham Company had not purchased the land by the 21st March 1839, or had not completed the line by the 24th June 1840, the Birmingham Company should complete it themselves and the line pass into their ownership. If this occurred the Cheltenham Company had the power to repurchase the section of the line at half the cost, provided that they had completed their own line by 21st June 1845. Both Companies were subject to the trusteeship of their own section of the line. The Act of 1838 also provided that each Company should make its own station at Gloucester. Joseph Viner resigned the Deputy Chairmanship on the 2lst August 1838, his place being taken by C.F. Sage of Gloucester.

The Directors now felt obliged to proceed with the Cheltenham to Gloucester section and at the next half-yearly meeting, held at Stroud on the 2nd November l838 - previously they were held in Cheltenham - they announced that two contracts had been let extending from Lansdown Road at Cheltenham to Barnwood Road at Gloucester, and that all the land having been purchased, the contractors were at work.

In the Cirencester section two contracts covering the line to Minety had been let and the land bought with the exception of three acres, while two more contractors had taken the piece from Minety to Swindon. With the exception of Squire Gordon's portion, the Directors stated that they had acquired the land on favourable terms.

Charles Richardson, a pupil of Brunel, undertook the supervision and setting out of the line from Swindon to Cirencester. He was later to design the first cricket bat with a spliced cane handle, but was more famous for being the chief engineer on the Severn Tunnel construction. While Squire Gordon was raging his opposition, special thanks were afforded o Earl Bathurst "for his kind assistance in furthering the interests of the Company". An Income Account for this half year shows a receipt for exactly one hundred thousand, three hundred and eighteen pounds, seventeen shillings and five pence. A sub-title reveals that the figure represented only expected traffic.

There were disputes over the purchase of land on the Gloucester to Cheltenham section. In one case a jury reduced a claim from two thousand two hundred pounds to one thousand and fifty six pounds. This case then set a precedent for other disputed claims. The Company were also closely watching their own finances and Richardson was ordered to ensure that his books were correctly balanced each Saturday. He was also told to dispense with the services of two surveyors in the Cirencester section and transfer a third to the Stroud area.

In 1839 the Birmingham and Gloucester Company purchased four acres of land near the cattle market in Gloucester for their station, so the Cheltenham Company, as duty bound bought the land from them and let a contract for the Railway between it and Barnwood Road, using part of he old tramway for the purpose. The two Companies also agreed that each should have its own station in Cheltenham as well as Gloucester.

No attempt had been made to begin the work on the section between Kemble and Gloucester, except for the sinking of five shafts for the Sapperton Tunnel. The Company shares were now at a heavy discount-and its credit very low. The Directors were most reluctant to make calls on the shareholders. At the end of 1839 about two hundred thousand pounds had been received, and the arrears amounted to over forty thousand pounds. 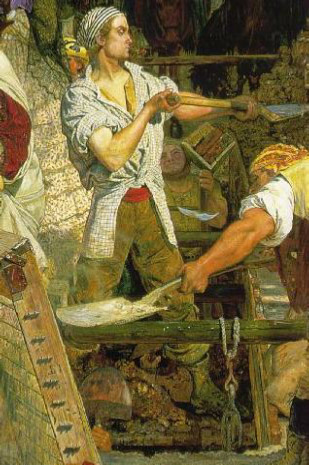