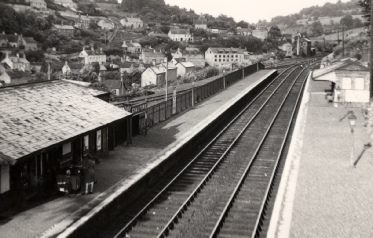 Chalford station, to the west of the tunnel, was opened on 2nd August 1897 to serve the small community. The village was built on the ledges of the valley with narrow footpaths leading to the cottages and chapels. The station  was also built on a ledge on the west slope of the hill. The up platform building, a single storey, contained the booking clerks and parcels office and a passenger waiting room. The down platform building was a brick-built shelter with toilets and waiting room. This platform was reached by crossing the road bridge to the west of the station. A small goods yard lay to the north side and contained a set of cattle pens, while further east the signal box, a six-ton crane, weighbridge and railmotor engine shed stood.

On the opening day the local Baptist Tabernacle ran an excursion to the Crystal Palace Music Festival, quite an occasion for that time. Chalford was the home of the railmotors, and after 1903 new sidings and a shed were built. This was the first shed to be built solely to house a railmotor, and was built of timber framework clad with corrugated iron on a brick foundation. It was ventilated by smoke troughs on four stacks. Outside was a 12 foot engine pit. On the rails adjacent to the shed were sidings for coal and gas wagons. The water supply was from a pillar tank. An old brake van body served as the enginemen's cabin and a covered goods wagon body as a wood store.

The engine shed was destroyed by fire on the night of the 8th January 1919 inspite of the brave efforts of the Chalford signalman Harry Grimmett, and the Brimscombe horse-drawn fire engine. Railmotor no. 48 was destroyed in the fire but the gas tank wagon and a railmotor trailer were saved, the Brimscombe banker being called to push them to safety. Local rumour blamed the bus company for starting the fire but it was almost certainly caused by vagrants who used the shed as a night refuge. Two thousand pounds worth of damage was caused by the fire and the shed was never rebuilt. Despite the lack of shelter the railmotors and railcars continued to be serviced at Chalford until the 2lst May 1 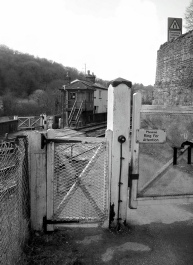 951 when the work was transferred to Brimscombe. 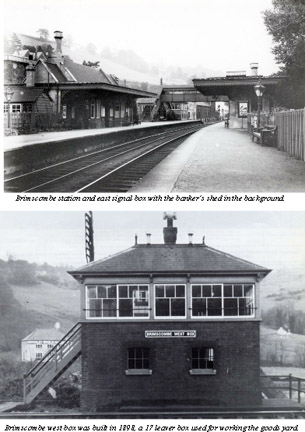 Brimscombe was a former station on the line and lay at the foot of the 1 in 66 incline to Sapperton. It was the stabling point for the Sapperton bankers which were housed in a single road engine shed to the east of the station. The shed was built for two locomotives and enlarged in the 1870's, possibly around the time of gauge conversion. The goods yard and shed lay to the western end. The complex layout needed the control of two signal boxes. Cattle pens and a loading bay were added later. The up platform, as usual, accommodated the main station building. The down platform was provided with a stone built waiting shelter. These buildings were notable as they were of true Brunelian style, based on the Culham chalet design. A covered footbridge later linked the two platforms.

On the 2nd January l856 the Thames and Severn Canal Company wrote to the GWR, objecting to their use of hillside spring water for the station and engine shed. This, they claimed, denied the canal of a feeder, in accordance with the Act of Parliament. 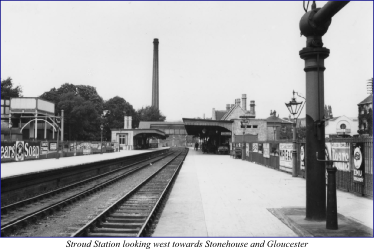 Stroud station was opened on 14th April 1845, when the first Director's train passed through. Only a fortnight before, the road bridge over Rowcroft was still being constructed, after the demolition of a block of houses. The town is sited at the junction of five Cotswold valleys and was at the heart of the local woollen industry. The station buildings, although based on a Brunel design, are said to be “rather disappointing being of low frontage”. Some of the fine tall chimney stacks have been repaired and replaced, as a near copy to the originals. Some rebuilding and refurbishment took place between 1870 and 1890 and again in 1914 when, due to the increased traffic created by the railmotors, it was necessary to set back the down platform buildings and lengthen the up platform at its western end. Two water towers were sited in the down yard with the Great Western bus garage near by. 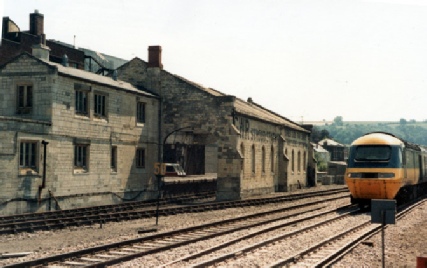 The number of passengers booked in 1868 was 49,597, while the number twenty years later was 77,309. In l889, 81,482 passengers were booked with receipts of over ten and a half thousand pounds. Originally no footbridge was provided, the passengers taking the "risk" of the level crossing which resulted in many fatal accidents. The bridge was eventually built by the local engineering firm of Daniels. The goods yard, which lay to the east of the station, was expanded in the late 1880s by the removal of a soil bank from the outside of the Imperial Hotel, adjacent to the main station yard. A through goods shed was built of Cotswold stone with an attached side office. The shed bears the GWR painted lettering "GWR STROUD STATION Express goods train services daily transits between important towns".

To the west of the station was the private siding of R. Townsend, seed merchant. Their siding lay at right angles to the main siding and trucks were hand shunted via a wagon turntable. Should the wind be against the direction of movement then the local tank engine would travel down on the up line to give assistance. Both the main sidings and the west siding were provided with a signal box. Loading bays were added to both the up and down yards at the eastern end. The west end of the station was built on the brick arches of Watts viaduct, and the down platform provided an aerial view into the Stroud Brewery. It is said that on a dark night enginemen on a train stopped over the viaduct had to be careful not to jump off the train.

Railway Time. However it was noted by the Greenwich Royal Observatory that "Stroud did not immediately adopt to Railway Time, and the citizens continued to use local time, which meant that the 11.30 am London train left at 11.21 am. This time difference of nine minutes was enough for trains to be missed, so in 1858 a railway clock was set up in Kings Street Stroud". This weight wound clock was built by Robert Bragg and has been preserved in Stroud library. A simple electric clock now replaces the original railway clock.

Jefferies Sidings at Ebley, two miles further from Stroud, were laid in September 1898 to serve the local coal haulier. The single loop was controlled from a ground frame. 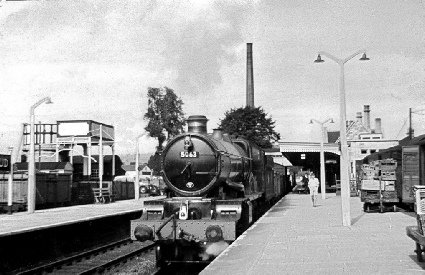 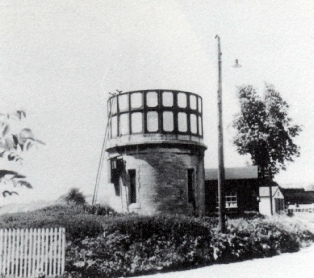 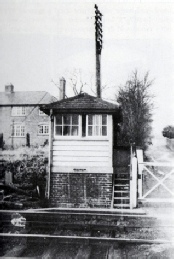 A 60's photograph of Stroud looking west. A rectangular water tower has joined the round tower, the tall yard lamp has gone but the old bus garage remains. Here outshopped castle, 5063, Earl Baldwin heads back to Swindon on a running in turn.. 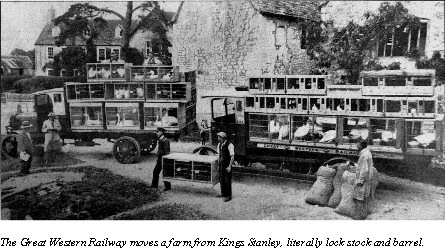 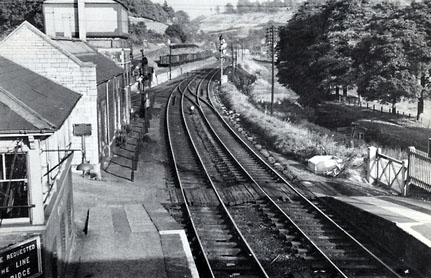